A Twitter user with the handle @ToyinFab took to the platform to narrate how a friend’s in-laws warned her to stop calling her husband’s younger ones by their names.

According to the lady, her friend who was invited to a family meeting was told to start adding ‘Aunty’ and ‘Brother’ prefixes to her husband’s younger ones’ names.

She however added that the lady’s husband is on her side and has told his family members that his wife won’t be doing such.

“Yoruba people do the most. Someone I know was called for meeting by her in-laws yesterday and told she needs to stop calling her husband’s younger ones by their names as per start putting brother and Aunty prefixes to their names. I am actually beyond pissed off in 2019 o.

I think the most annoying thing was how she said they told her that everybody in the family isn’t happy with her because of that. That she is a great person o but that’s the only issue they have with her and that everyone has actually been discussing it and I am like WTF! EYWRN”, she tweeted.

See the tweets below; 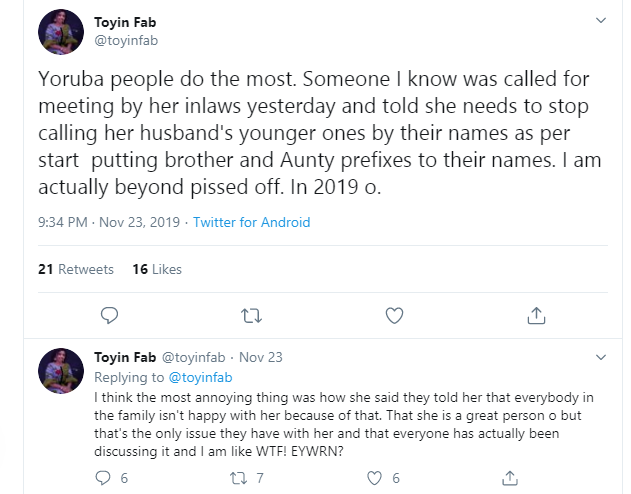 A 46 year-old pastor, Evangelist Chidi Eke has died while fasting for 40 days and nights in Eziala Nguru in Ngor Okpala council area of Imo State. It was gathered that the deceased, who had abandoned his wife and two children in Lagos and came back to the village, was last year said to have […]

A South African Lady has shared the story of how her elder brother, was scalded with hot water by his wife/mother of his kids, over her insecurities. CLICK HERE TO DOWNLOAD C.RONALDO BY SKYLORD FT. KINFRESH   Sharing a before and after photo of the young man, she wrote; “This hurts me to the core…This […]

Asuku Jamiu Abdulkareem, the new Chief of Staff to Kogi state governor, Yahaya Bello, has alleged that the impeached deputy governor of Kogi state, Elder Simon Achuba, left a charm in his government house apartment after he hurriedly exited the residence.   Elder Simon Achuba was impeached recently by the Kogi state House of Assembly. […]